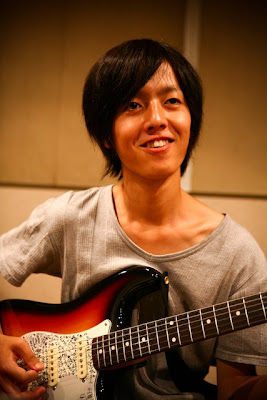 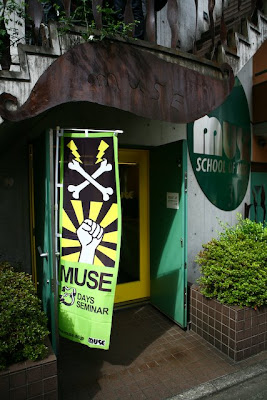 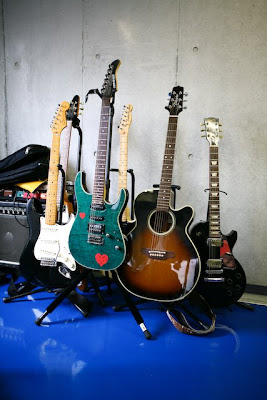 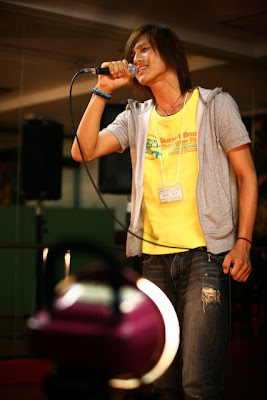 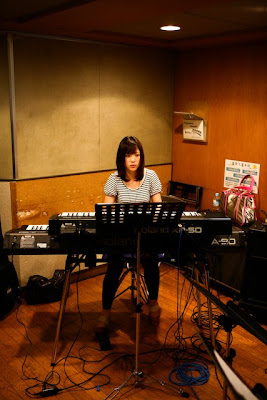 I was hired to shoot a 3 days seminar at MUSE, a music school here in central Tokyo. I've always loved music of all sorts (some more than others) so this was a pretty interesting 3 days, even if finding new, fresh angles in really tight rooms filled with shy and nervous teens proved to be a worthy challenge. There is a limit of what can be done when you take time, practicality and functionality in the calculation. But I think I got what they wanted ( the school offered me a new job just earlier today). If it doesn't always turn out they way you were aiming for you'll see that in the end it turns out that it works anyway somehow. I am seldom satisfied with my own work....more than seldom with other peoples. But I have come to settle with what's in my nature and ability. There are no really good short cuts to a good image (in my world...no, photoshop won't do it man!), but there are times when your own vision just can't see what is good and you'll have problems to settle down with what's there in front of you. Give it some time and you'll see that the images actually came out the way you aimed for at the start.
Posted by -Straight Edge Photography- at 31.7.09 No comments: 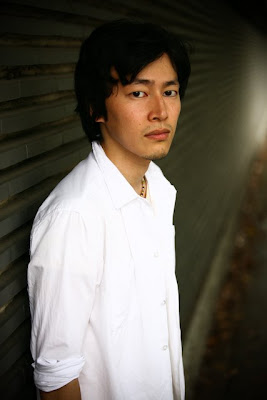 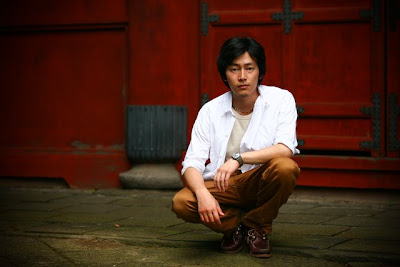 A client wanted a professional portrait taken for profile documents and what not so I shot a whole series of this guy. The rain clouds were hanging in the sky and gave me the perfect diffuser light. I try to work as much as I can outside in natural light or inside with window light and a day like this gives you a rich and "full" light in my view. Direct and strong sunlight works in places like in the mountains, in the desert and at sea where the air is free from all the stuff we put in the air in the cities. I found this locations near a big old temple in the hear of Tokyo. Simple, plain. strong lines and with a certain location feeling to it. 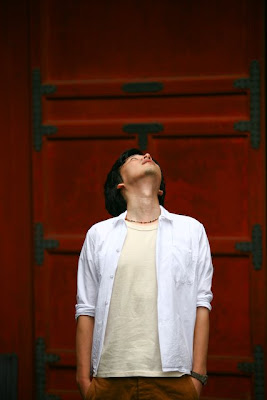 Posted by -Straight Edge Photography- at 19.7.09 No comments: 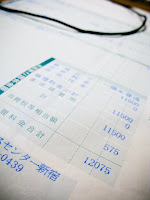 After 3 hours in Canon service centers care and ¥12075 from my pocket the G9 mystery problem got solved. Was told it was some data reader in the camera that was broke and got replaced with a new unit. A friend of mine was sure it was a curse from a road-kill cat I was shooting a couple of month back, and he told me that the service people at Canon just did a simple exorcism and dragged the evil spirit (in this case a pissed-off stray cat!?) out and that it shouldn't have been so expensive. Well, I'm back in the pocket camera world and glad it all got solved, demon or not!
Posted by -Straight Edge Photography- at 17.7.09 No comments:

Email ThisBlogThis!Share to TwitterShare to FacebookShare to Pinterest
Labels: Cameras

The COVE (another money & greed tale...)

Better stop this slaughter right now, you can support by telling about this documentary.....LINK

Another proof that the so called "humans" are just animals after all.......or?
Posted by -Straight Edge Photography- at 14.7.09 No comments:

I was invited to shoot metal band SURVIVE for their DVD release gig last Saturday. Pulling Teeth, another band I have also been shooting for many years now was opening up. Nice to see these people from time to time, they all live for the music and it seems like everything they do is evolving around the band and music. I like this kind of dedication to a cause, whatever it may be.
Funny when you shoot bands, you get your "favorites". Some musicians are just more photogenic than others, the way they move, their pose and statue all play roles in how the final composition will be. For some reason (I actually don't really know why myself) I always get just the perfect shots when I shoot Shinjiro (Bass Survive), I don't think I have one "bad" shot of him. Same goes for Taiji (Bass Pulling Teeth), it's good fun when it turns out just like you have prepared to shoot, get what you played up on beforehand in the mental image. Of course the opposite also occurs. There are some people really hard to get a good shot of. I won't tell you who, you'll see for your self. 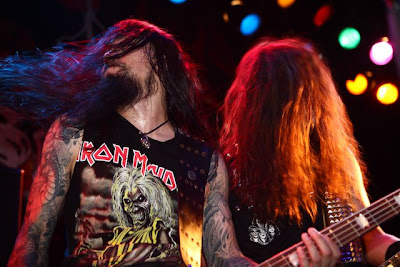 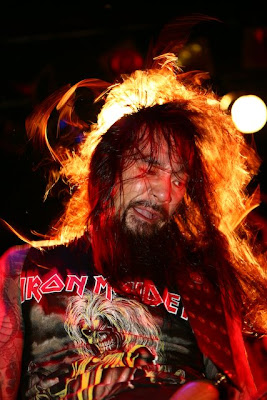 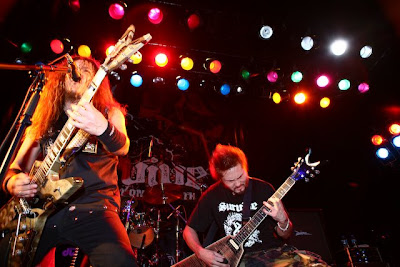 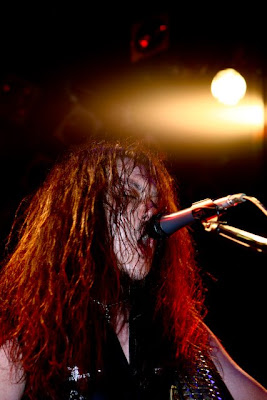 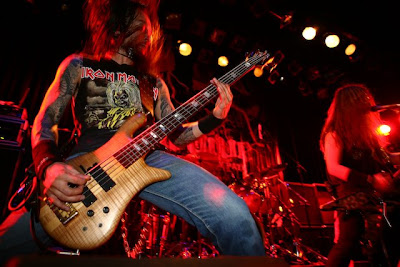 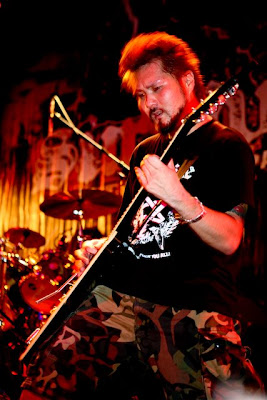 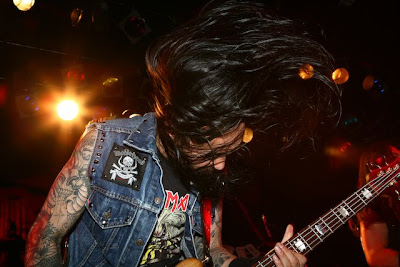 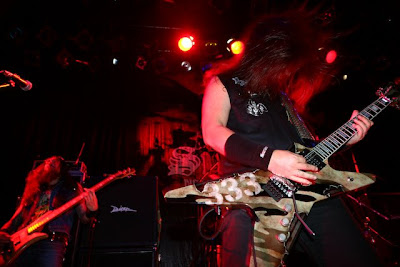 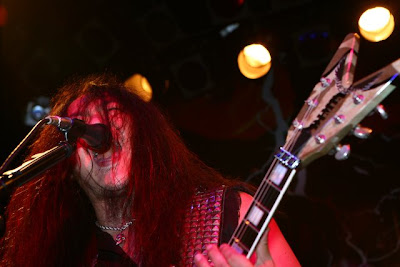 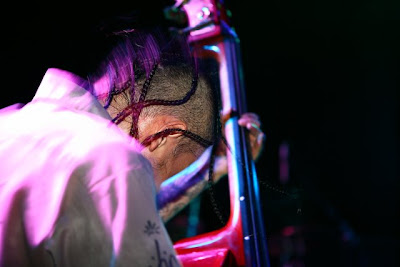 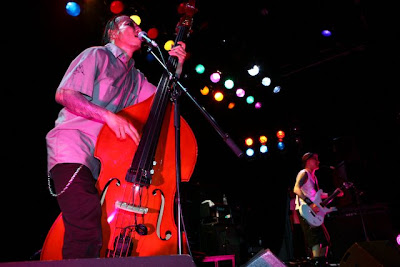 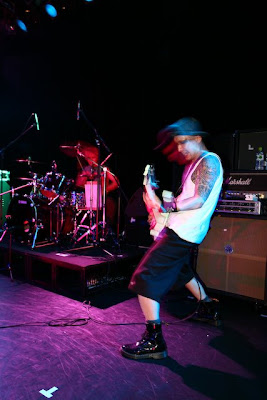 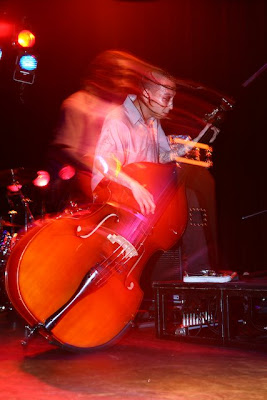 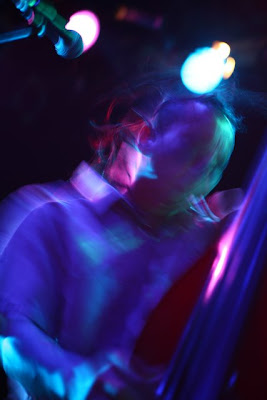 First day of shooting OGRE Japan's new promotion video for their song "Betrayer". I decided to go out of the normal "promo" rut and do more of a "visual" field study of the from-now-on Ogre's symbolic real-life demon. This guy is real, no fake stuff my friends. Well, the blood was cos we couldn't find enough real human blood in time for the shooting...ha ha ha. The music OGRE plays are really heavy and hits you in the face like a sledgehammer. I will with this piece try to get the musical and the visual to be a mismatch of a sort where hopefully the visual helps to tighten the musical end vice versa. Also to push "The Creature" a.k.a Mao more into the Ogre "family". If you see him at a show, pay him some respect. Lets see how the boys like it after editing and all that stuff. A real challenge for me to shoot something like this on video, as well as another aspect of visuality. Shooting elephants in the forests of Northern Thailand, Lighthouses in Oregon, cooperative CEO's or blood stained death metal is all the same when it comes down to the basics. Just have to try to keep it simple&clean, straight and with a personal touch. 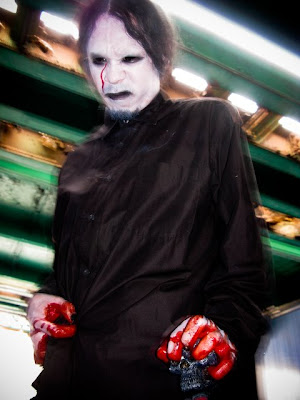 Posted by -Straight Edge Photography- at 12.7.09 No comments: 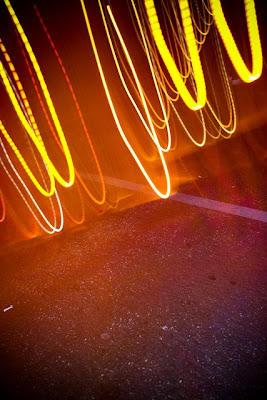 Just another observation.. or two

Back in town after a pretty fruitful week abroad. I might have mentioned before on this blog, how nice it is to return back "home" to Tokyo after a time away. Japan never stops to interest me and make me feel I haven't seen enough yet. Being on of the most modern as well as one of the many highly (over) educated nations on this planet it is really interesting to also observe that some of the sickest people (I have ever met anyways) are from here. A combination of a culture built up on a really unique history and a clash with modernity in a very short time has shaped a nation like no other( China and South Korea not far behind). It's always more obvious when you go abroad to see how twisted and out of touch with reality and common sense the majority of the Japanese are. When the norm of Nippon and "follow the leader" mentality isn't around to fall back on the most absurd situations occur. Truly unique, always a pleasure to observe. Landing in Narita and all falls back to it's given place. All those funny "travel" clothes, Mickey Mouse suitcases and synchronized group movements make sense here, the "WE are home" feeling in the arrival halls is dense and like I said, stuff make sense suddenly. Like a camouflage painted Hummer truck suddenly make sense in the desert but has no obvious function more than being loud, expensive and inefficient transportation anywhere else. If the Japanese would be a car they wouldn't be a little Nissan or Suzuki, no, they would be a fully equipped Hummer truck built for operation desert storm but used as tour group transportation at Tokyo Disneyland.

Anyways...
I was shooting lots with my Canon G9 the last week, but when I came home some loveless bastard camera/SD card gnome virus had deleted all images...!? -"Naa, boy...you probably did something wrong. It can't happen!" you might say. Well, I have not a trace left of that exceptional thunder storm cloud I wanted to post here today...same goes for the rest of the images...F.U.C.K. Time to take the camera back to the service center (again) to have some clueless temp-staff giving me some transparent answers (i.e they don't know either what's wrong)....man, I loved that camera!

Have some more images on the way, stay tuned.
Posted by -Straight Edge Photography- at 5.7.09 5 comments:

Stuff From The Past